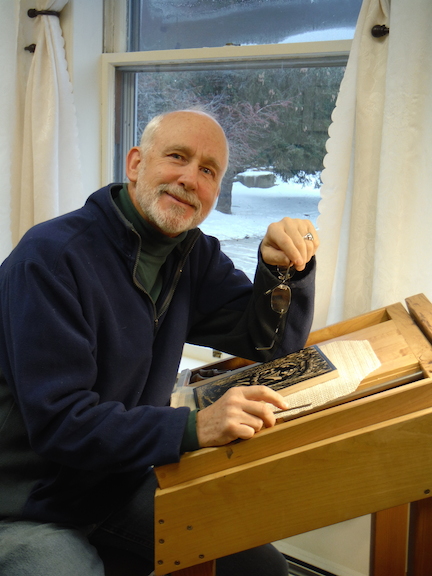 I love the alchemy of printmaking. It transmutes a visual idea through the crucibles of drawing, carving, inking, and printing into a finished image that holds some surprises for its maker, and hopefully some delight for its viewer. For me, the very indirectness of making prints invites the unexpected, in contradiction – you might think - to its technical demands, and playing with that contradiction seems to be an integral part of a certain creative process.

My first prints grew out of a fascination with medieval art and a desire to somehow rediscover, celebrate, and share the exuberant wonder of sculpture created a thousand years ago. I became entranced in a whole new way once it got personal, and I realized I was almost trying to bring to life people my imagination had met somewhere in the dusty past. However, since becoming a full-time printmaker a few years ago, I spend more time in the here and now as well, exploring the visual wonder of the contemporary world with – and perhaps beyond – more representational work.

*****
My creative journey has had its own curious transmutations. It began with photography in the 1970s, when it was still done with silver and light (but in the dark). It’s gone on to include sifting through earth and time as an archaeologist; many years of working with wood in all its forms, from house framing to hand-carved furniture; and then working with living trees and ecosystems as a practitioner of ecological restoration. Now it’s circled back to visual art, but still with a connection to wood. And therefore to trees…

Though I’m partly self-taught as an artist, I've participated in a number of classes and workshops over the years, including at Colorado College, the University of New Mexico, Santa Fe Community College, and Massachusetts College of Art. Most importantly, I’ve been fortunate enough to work with some great mentors, especially printmakers Jean Gumpper, Siri Beckman, Matthew Brown, and Jim Lee.

I was born in eastern Washington, but grew up and spent most of my life in the mountains of northern New Mexico. At one time or another I’ve also lived in Colorado, Arizona, Louisiana, Britain, and Italy, and moved to the coast of Maine in 2013. My print studio, the Merrymeeting Press, opened in downtown Bath in 2015, where it shares space with the Green Lion Gallery.

My work is in the permanent collections of the Northwest Art Center, Minot, ND, and the Kyoto International Woodprint Association in Japan. It's also in private collections across the USA and in the UK. I'm currently an Invited Artist at the Pontifical Catholic University of Peru, in Lima, for part of the year.
Next
Previous